The Fellowship of the Bill – Part 9

This is the final installment in the story of Michigan’s nine-year journey toward a law to license Certified Professional Midwives. The story begins HERE. The entire series can be accessed HERE.

The Senate floor and House concurrence votes would have been a more striking triumph if more of the Fellowship had been awake for them (Frame 1). Eowyn’s thought bubble is an oblique tribute to this famous Far Side cartoon.

Michigan’s Governor Snyder is represented here as Galadriel (Frame 2) just to give someone the opportunity to repeat the character’s famous speech:

The Quest stands upon the edge of a knife. Stray but a little, and it will fail, to the ruin of all. Yet hope remains while the Company is true.

Sing it, Sister! Also, “Governor Galadriel” has a nice ring to it. The time span between the passage of the bill and the Governor’s signature seemed endless (Frame 3). The Yule feast pictured in Frame 4 is not only an outright  invention, but casually borrowed from a tour of New Zealand Lord of the Rings filming locations. In return, we suggest you check out tours at MikeTheGuide.com and make a point of stopping at the Green Dragon Inn near the Hobbiton Movie Set.

The Governor finally signed the bill early in 2017, a cause for great celebration (Frame 4). If you know anything about Michigan, you’ll appreciate the celebration did not take place shortly following the signing, but much later in the year on another equally beautiful – and much warmer – Lake Michigan beach.

Is this successful enactment of the bill the end of the Fellowship? Probably not. A portion of its membership is ensconced on the new state Board of Licensed Midwifery – portrayed here by a photo of a 1949 committee of the Florida State Prison system. A future effort to guarantee Medicaid coverage for Licensed Midwife care has also not been ruled out. For the meantime, the Fellowship is returned to its daily routines. Babies are born. Parents are created. Midwives are credentialed. Life goes on.

P.S. A more detailed look at the Fellowship’s experience with US-MERA is available at I Have An Elixir to Sell You.

The Fellowship of the Bill – Part 8 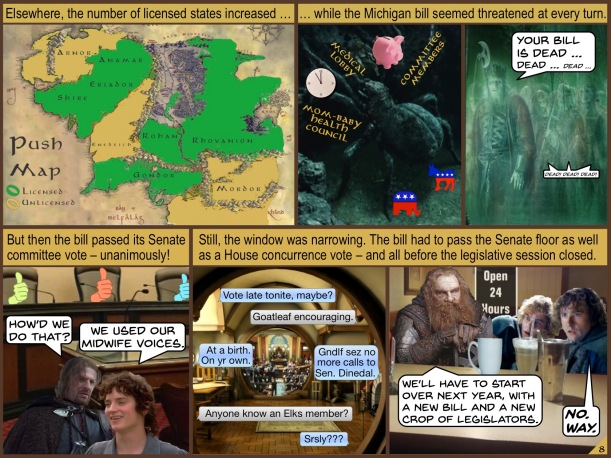 While Michigan was toiling towards Mordor, other states continued to enact CPM licensure measures (Frame 1). The big surprise of 2013 was Indiana, a highly punitive state whose midwives had long been forced underground. Rhode Island regularized its midwives’ legal status in 2014, followed by Maryland in 2015. In 2016, Maine became the 30th state to license CPMs. The licensure acts just listed were evaluated by the Fellowship with mixed results, but the chief worry was that Michigan would be the very last state to pass such a measure.

Like the many-limbed Shelob, numerous entities and factors continued to threaten the Michigan bill (Frame 2). The medical lobby was joined in its opposition by the primary Michigan maternal and child health organization. Each Senate committee member had to be laboriously courted. Both majority and minority parties displayed their foibles, and the Fellowship hardly dared to shake its piggy bank. But the primary foe was time. Fellowship members regularly heard nightmare voices proclaiming the death of the bill.

After some heavy-duty compromising, the Fellowship was pleased to see its hard work pay off. When the bill passed out of Senate committee, it nevertheless felt like a miracle (Frame 3). Boromir, not being a midwife herself, developed a belief in the persuasive power of the “Midwife Voice.” At any rate, that’s how she explained the vote – and her own surprised willingness to take on tasks following Fellowship meetings.

It was late 2016. The legislative session was anticipated to end at an unnamed December date. Would the bill receive a Senate floor vote? Texts once again flew back and forth (Frame 4) between Fellowship members, Gandalf, Senate staffers, and anyone whose opinion might carry weight with Senate leadership. A failure would mean beginning all over again the following session, a prospect that filled the Fellowship – and its empty pockets – with dread.

The Fellowship of the Bill – Part 7 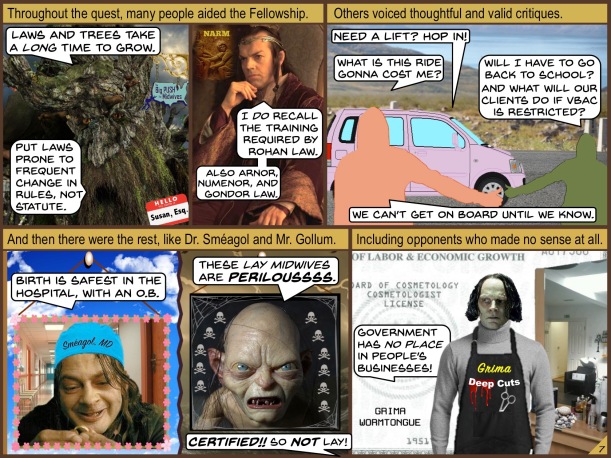 Many others assisted the Coalition. The Big Push (see Page 1) was particularly helpful with both collective wisdom from other states and specific strategy and legal knowledge from Susan Jenkins, Big Push steering committee member and legal advisor (Frame 1). Likewise, Ida Darragh of NARM (North American Registry of Midwives) seemed to hold every licensed state’s education and training requirements in her head (Frame 2). Other direct entry midwives were generous with their advice and questions (Frame 3).

On the other hand, certain factions promised to oppose the bill no matter what, including a notorious national troll who had for years attacked midwives, home birth, physiological birth – anything that deviated from the standard medical model of care (Frames 4 and 5). Like many Jekyll-and-Hyde pontificators – or, in this case, Sméagol-and-Gollum ones – this troll typically appears with a wish to protect the safety of mothers and babies that quickly metamorphoses into vicious diatribes against midwives.

The ultimate wild card, however, was a local health care provider who opposed the CPM bill on the principle that licensure constituted government interference. She herself, of course, was licensed by the state (Frame 6). She is represented here as a hairdresser, to spare her real profession from embarrassment. The pile of Petoskey Stones behind her is included as Michigan Content.

The Fellowship of the Bill – Part 6

A whole new game began in 2016, as the bill’s success in the House piqued the interest of opposition groups, who then prepared to crush it (Frame 1). Their messages were nothing new – worries about vicarious liability for midwife practice, even though such a circumstance was already precluded by common law; and loud concerns for the safety of mothers and babies acting as a proxy for turf wars. The Fellowship sharpened its spears for the Senate campaign.

Meanwhile, however, any hope of accomplishing anything in either chamber was crowded out by the Courser-Gamrat scandal (Frame 2). Two Tea Party House members – married, but unfortunately not to each other – were discovered in a sexual relationship. That alone might not have kindled such a furore, but as per usual in the political arena, it was the failed cover-up that doomed the two lovebirds. Moral of the story: If your moral politics are those of an extreme conservative Christian legislator, any attempts to conceal your illicit affair by instructing your staff to leak a story that you are involved with a gay sex worker (!) are probably unwise. The feeding frenzy that followed culminated in the lovebirds’ ousters after a great deal of legislative process, which unfortunately occupied the Fellowship’s bill sponsor, who had the ill fortune to chair the Ethics Committee.

The Fellowship and its minions continued to dog legislators’ steps (Frame 3). As midwives, Fellowship members enjoyed endless connections to more or less everyone, and were not afraid to exploit those relationships. However, the real advances were made by engaging legislative staffers, who enjoyed – or at least shouldered – the responsibility to brief their bosses on pending legislation (Frame 4). Staffers typically had more time to devote to detailed analysis of issues and, furthermore, turned out to be instrumental in shaping legislators’ opinions. Indeed, some staffers helped the Fellowship by anticipating and managing the actions of other legislators (Frame 5). “Goatleaf” here is a composite of several extraordinarily effective staffers, who helped the bill progress despite numerous eleventh hour interventions that could easily have torpedoed it.

The Fellowship of the Bill – Part 5

The continual contacts required to maintain support in the Legislature turned the Fellowship and the larger birth community into merciless Polyannas (Frame 1). A certain amount of weariness was occasionally discernible in staffers’ greetings upon their discovery that the voice on the other end of the phone was yet another plea to support the midwife bill.

The long journey began to tell upon the Fellowship (Frame 2). Most of its members were practicing midwives, in itself a hard occupation to reconcile with family life. Responding to frequent sudden requests to appear in Lansing, formally dressed and well-spoken, made for a heavy burden, especially as progress appeared stalled, thanks to Rep. Sarumon’s refusal to schedule a committee hearing (see Part 2). However, Michigan term limits do occasionally work to the advantage of those doing Noble Work, and a double strategy ensured the bill’s safe crossing (Frame 3) to a committee hearing: First, Rep. Sarumon was termed out of the House. Poof! Second, the bill sponsor wisely arranged for it to be assigned to a different committee in the new session.

The bill promptly received two hearings, at which ACOG proclaimed that the legislation did not conform to the (as-yet-undefined) US-MERA standards. Nevertheless, in November 2015, the bill passed out of committee (Frame 4). The Fellowship’s satisfaction with this success was nothing compared to the jubilation after the bill’s 79-25 (bipartisan!) vote on the House floor. Lobbyist Jean proclaimed that such a day did not come often in the life of a public affairs consultant, which explains her declared intention to commemorate the event with a tattoo on a Body Part to be Named Later (Frame 5).

Any success effected by sustained exertion should be followed by celebration and repose. Unfortunately, those pleasurable activities are inevitably followed by mass thank-you note writing (Frame 6).