As we were creating a cartoon about the complexity of the current health care payment system, we noticed media reports on common misunderstandings of the Affordable Care Act (ACA). The most recent was in the Michigan news weekly Bridge, which noted, “In Michigan, some counties with the highest Medicaid expansion and ACA usage gave Trump some of his largest victory margins …”
People have been known to vote against their own interests for the sake of broader principles, a tendency that politicians are happy to exploit. However, on the chance that voters were misled on simple facts, we bring you the following educational cartoon, put together lickety-split to be of service before the ACA can be repealed! 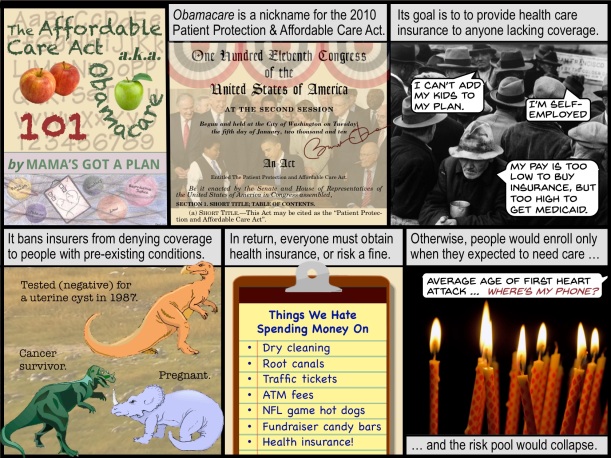 We hope that The Affordable Care Act/Obamacare 101 has been useful to you. Please respond on our Facebook page if you have ideas for future cartoons on this subject – or any other!

Publicity for the upcoming annual conference of the Midwives Alliance of North America, combined with this summer’s Republican and Democratic national conventions, were the twin inspirations for this cartoon.  It seems unlikely that we will elect a midwife-in-chief anytime soon, but cherishing midwives’ skills and experience under the cover of political maneuvering seems like an end in itself.

Frame 1. The background photo is from one of this summer’s conventions. Does it matter which? The MNC logo is based on a graphic by Sam Taeguk, shared under a Creative Commons license.

Frame 2. Every gathering needs a quilt exhibit! This quilt is intended to convey – by the variety of fabrics in the baby blocks – the diversity of North American midwifery. Every midwife has been caught out at least once wearing good clothes when the urgent summons to a birth arrives. What to do with those stubborn stains? When Spray N Wash fails, cut up that fabric for a quilt! Many thanks to Kathy Peters for her quilt design skills. The person gazing at the quilt is taken from a photo by Phil Roeder, shared under a Creative Commons license.

Frame 3. The photo by Pete Souza shows a 2009 meeting of President Obama’s cabinet, shared under a Creative Commons license. We’ve taken the liberty of cropping out the President, but perceptive readers will recognize individual cabinet members.

Frame 4. This frame shows the White House Situation Room, as portrayed in The West Wing.

Frame 5. This song, published in 1980 by Molly Scott of Sumitra, is sung here in the U.S. House of Representatives.

Frame 6.  Anyone with knowledge of the midwifery model of care will recognize the original context for the words MANA president Marinah Farrell is speaking to Vladimir Putin against the background of the Oval Office:

The Midwifey Face is an invention of your cartoonist, who theorizes that midwives are endowed with special facial features or expressions that allow them to persuade anyone to do anything, no matter how difficult.