The Fellowship of the Bill – Part 6 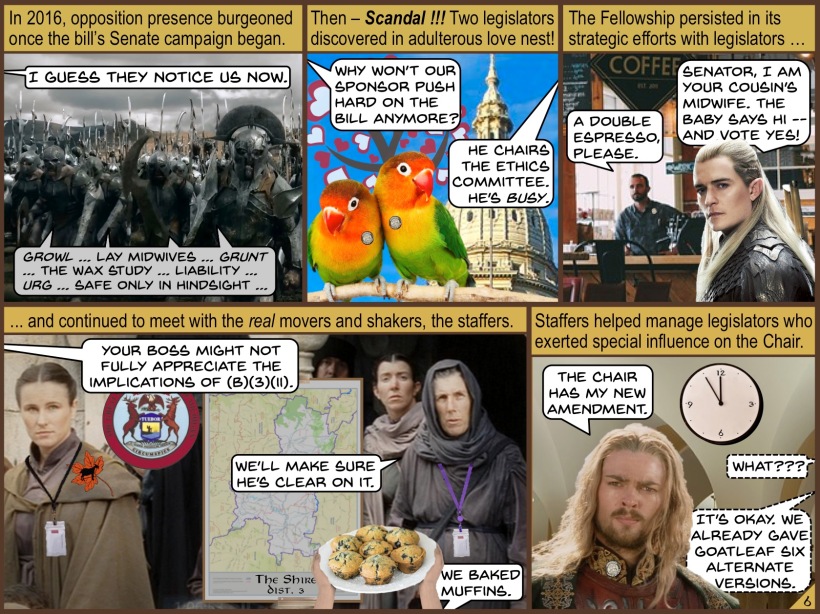 A whole new game began in 2016, as the bill’s success in the House piqued the interest of opposition groups, who then prepared to crush it (Frame 1). Their messages were nothing new – worries about vicarious liability for midwife practice, even though such a circumstance was already precluded by common law; and loud concerns for the safety of mothers and babies acting as a proxy for turf wars. The Fellowship sharpened its spears for the Senate campaign.

Meanwhile, however, any hope of accomplishing anything in either chamber was crowded out by the Courser-Gamrat scandal (Frame 2). Two Tea Party House members – married, but unfortunately not to each other – were discovered in a sexual relationship. That alone might not have kindled such a furore, but as per usual in the political arena, it was the failed cover-up that doomed the two lovebirds. Moral of the story: If your moral politics are those of an extreme conservative Christian legislator, any attempts to conceal your illicit affair by instructing your staff to leak a story that you are involved with a gay sex worker (!) are probably unwise. The feeding frenzy that followed culminated in the lovebirds’ ousters after a great deal of legislative process, which unfortunately occupied the Fellowship’s bill sponsor, who had the ill fortune to chair the Ethics Committee.

The Fellowship and its minions continued to dog legislators’ steps (Frame 3). As midwives, Fellowship members enjoyed endless connections to more or less everyone, and were not afraid to exploit those relationships. However, the real advances were made by engaging legislative staffers, who enjoyed – or at least shouldered – the responsibility to brief their bosses on pending legislation (Frame 4). Staffers typically had more time to devote to detailed analysis of issues and, furthermore, turned out to be instrumental in shaping legislators’ opinions. Indeed, some staffers helped the Fellowship by anticipating and managing the actions of other legislators (Frame 5). “Goatleaf” here is a composite of several extraordinarily effective staffers, who helped the bill progress despite numerous eleventh hour interventions that could easily have torpedoed it.